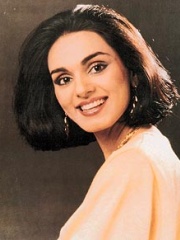 Neerja Bhanot, Ashoka Chakra (7 September 1963 – 5 September 1986) was an Indian head purser who died while saving passengers on Pan Am Flight 73 which had been hijacked by terrorists during a stopover in Karachi, Pakistan, on 5 September 1986. Posthumously, she became the youngest recipient of India's highest peacetime gallantry, the Ashok Chakra Award, as well as several other accolades from the government of Pakistan and the United States. She was shot while helping passengers escape through the emergency exits. Read more on Wikipedia

Since 2007, the English Wikipedia page of Neerja Bhanot has received more than 8,630,374 page views. Her biography is available in 29 different languages on Wikipedia making her the 347th most popular social activist.

Among social activists, Neerja Bhanot ranks 346 out of 426. Before her are Sakine Cansız, Wolfe Tone, Lucy Stone, Wu'erkaixi, Claudette Colvin, and Eoin O'Duffy. After her are Hereward the Wake, Otto Warmbier, Afeni Shakur, Nadia Murad, Wang Dan, and Stokely Carmichael.