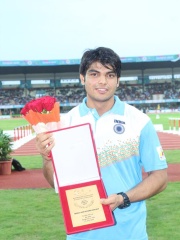 Naib Subedar Neeraj Chopra (born 24 December 1997) is an Indian track and field athlete and an Junior Commissioned Officer (JCO) in Indian Army, who competes in the javelin throw. He represented India at the 2018 Asian Games where he won a gold medal, setting the national record of 88.06 m, and at the 2018 Commonwealth Games where he also clinched the gold medal. He was the 2016 IAAF World U20 champion and set the world junior record of 86.48 m at the U20 championships. Read more on Wikipedia

Since 2007, the English Wikipedia page of Neeraj Chopra has received more than 455,502 page views. Her biography is available in 16 different languages on Wikipedia making her the 2,062nd most popular athlete.

Among ATHLETES In India