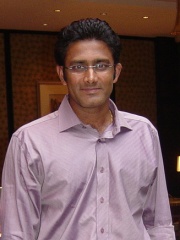 Anil Kumble (pronunciation ; born 17 October 1970) is a former Indian cricketer, coach, and commentator, who played Tests and ODIs for 18 years. A right-arm leg spin (leg break googly) bowler, he took 619 wickets in Test cricket and remains the third-highest wicket taker of all time (as of 2020, behind Muttiah Muralitharan and Shane Warne). In 1999 while playing against Pakistan, Kumble dismissed all ten batsmen in a Test match innings, joining England's Jim Laker as the only players to achieve the feat. Read more on Wikipedia

Since 2007, the English Wikipedia page of Anil Kumble has received more than 2,129,604 page views. His biography is available in 19 different languages on Wikipedia making him the 15th most popular cricketer.

Among CRICKETERS In India