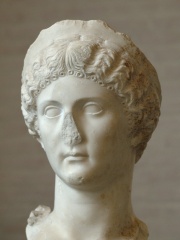 Julia Drusilla (16 September AD 16 – 10 June AD 38) was a member of the Roman imperial family, the second daughter and fifth child of Germanicus and Agrippina the Elder to survive infancy. She was the sister of Emperor Caligula. She also had two other brothers, Nero Julius Caesar, and Drusus, and two sisters, Julia Livilla and the Empress Agrippina the Younger. Read more on Wikipedia

Julia Drusilla was the daughter of Germanicus and Agrippina the Elder. She was a sister to the Emperor Caligula, Emperor Claudius, and Emperor Nero. She was married to the Roman Senator Lucius Aelius Lamia Silanus Torquatus. Julia Drusilla was most famous for being the mother of Emperor Nero's firstborn son, Lucius Domitius Ahenobarbus.

Among politicians, Julia Drusilla ranks 1,869 out of 15,710. Before her are Agostinho Neto, Ashurnasirpal II, Hotepsekhemwy, Tiglath-Pileser I, Archduke Maximilian Francis of Austria, and Gurbanguly Berdimuhamedow. After her are Michael the Brave, Mohammed Daoud Khan, Francis, Duke of Anjou, Dihya, Sima Zhao, and Otto Strasser.