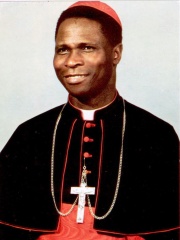 Bernardin Gantin (8 May 1922 – 13 May 2008) was a prominent Beninese cardinal of the Roman Catholic Church. He served as Metropolitan Archbishop of the Roman Catholic Archdiocese of Cotonou and then at the Vatican in the service of the Holy See as President of the Pontifical Council for Justice and Peace and then as Prefect of the Sacred Congregation for Bishops. Ultimately, he served as Dean of the Sacred College of Cardinals, a post his French consecrator as a bishop once held and the same position Joseph Ratzinger had after Gantin and before his election as Pope Benedict XVI. He was the highest ranking Catholic to come from Africa since ancient times, when some Popes were believed to have come from there. Read more on Wikipedia

Since 2007, the English Wikipedia page of Bernardin Gantin has received more than 34,206 page views. His biography is available in 18 different languages on Wikipedia making him the 1,151st most popular religious figure.

Among religious figures, Bernardin Gantin ranks 1,149 out of 2,001. Before him are Hyacinth of Poland, Nicholas of Japan, Pietro I Orseolo, Ippolito d'Este, Gregory V of Constantinople, and Joseph II of Constantinople. After him are William M. Branham, Ercole Consalvi, Stachys the Apostle, Jozef Tomko, Oswald of Northumbria, and Peter Bartholomew.

Among RELIGIOUS FIGURES In Benin