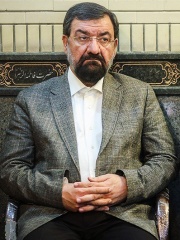 Mohsen Rezaee Mirgha'ed (Persian: محسن رضایی میرقائد‎, born on 1 September 1954 in Masjed Soleyman) is an Iranian conservative politician affiliated with the Resistance Front of Islamic Iran and senior military officer in the Islamic Revolutionary Guard Corps who currently holds office as the secretary of the Expediency Discernment Council. From 1980 to 1997, Rezaee was commander-in-chief of the Islamic Revolutionary Guard Corps. Before the Iranian Revolution, Rezaee was a member of the Islamist guerilla rebel group Mansouroun and joined the Mojahedin of the Islamic Revolution Organization following the revolution.Dubbed a "perennial candidate", Rezaee ran as a conservative presidential candidate in the 2009 elections, coming third with 1.7 percent of the vote, behind winner Mahmoud Ahmadinejad and reformist runner-up Mir-Hossein Mousavi. Read more on Wikipedia

Since 2007, the English Wikipedia page of Mohsen Rezaee has received more than 119,355 page views. His biography is available in 20 different languages on Wikipedia making him the 12,078th most popular politician.