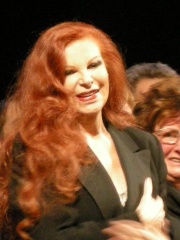 Maria Ilva Biolcati, OMRI (Italian: [maˈriːa ˈilva bjolˈkaːti]; 17 July 1939 – 23 April 2021), known as Milva (Italian: [ˈmilva]), was an Italian singer, stage and film actress, and television personality. She was also known as La Rossa (Italian for "The Redhead"), due to the characteristic colour of her hair, and additionally as La Pantera di Goro ("The Panther of Goro"), which stemmed from the Italian press having nicknamed the three most popular Italian female singers of the 1960s, combining the names of animals and the singers' birth places. The colour also characterised her leftist political beliefs, claimed in numerous statements. Read more on Wikipedia

Page views of Milvas by language