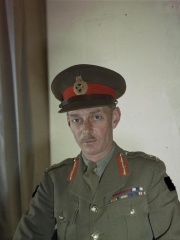 General Sir Miles Christopher Dempsey, (15 December 1896 – 6 June 1969) was a senior British Army officer who served in both world wars. As a junior officer, he fought in France during the First World War, where he was wounded, and served throughout the difficult interwar period, travelling to various corners of the globe. During the Second World War he had a close relationship with Bernard Montgomery and commanded the 13th Brigade in France in 1940, and spent the next two years training troops in England, before commanding XIII Corps for the invasions of Sicily and Italy in 1943. Read more on Wikipedia

Since 2007, the English Wikipedia page of Miles Dempsey has received more than 211,726 page views. His biography is available in 17 different languages on Wikipedia making him the 1,146th most popular military personnel.