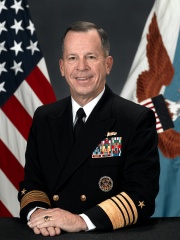 Michael Glenn Mullen (born October 4, 1946) is a retired United States Navy admiral, who served as the 17th Chairman of the Joint Chiefs of Staff from October 1, 2007, to September 30, 2011. Mullen previously served as the Navy's 28th Chief of Naval Operations from July 22, 2005, to September 29, 2007. He was only the third officer in the Navy's history to be appointed to four different four-star assignments; the other appointments being the Commander, U.S. Naval Forces Europe and Commander, Allied Joint Force Command Naples from October 2004 to May 2005, and as the 32nd Vice Chief of Naval Operations from August 2003 to August 2004. Read more on Wikipedia

Since 2007, the English Wikipedia page of Michael Mullen has received more than 608,556 page views. His biography is available in 21 different languages on Wikipedia making him the 1,158th most popular military personnel.