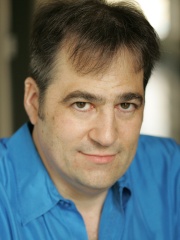 Michael B. Pollock (born March 9, 1965) is an American voice actor, best known as the current voice of Doctor Eggman in the Sonic the Hedgehog franchise, as well as many characters in various anime English-language dubs and video games. Read more on Wikipedia

Since 2007, the English Wikipedia page of Mike Pollock has received more than 73,128 page views. His biography is available in 18 different languages on Wikipedia making him the 8,756th most popular actor.

Among people born in 1965, Mike Pollock ranks 579. Before him are Robert Satcher, Steve Waugh, Sunetra Gupta, Kalpana, Lynn Shelton, and Vishal Bhardwaj. After him are Pat Finn and Eric Freeman.