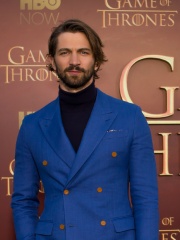 Michiel Huisman (Dutch pronunciation: [mɪˈxil ˈɦœysmɑn]; born 18 July 1981) is a Dutch actor, musician, and singer-songwriter, who has acted in both Dutch and English language TV series and films. Huisman played Ellis Jones in the fantasy romance film The Age of Adaline (2015), Sonny on the television series Treme (2010–13), Daario Naharis on Game of Thrones (2014–16) and Steven Crain on The Haunting of Hill House (2018). Read more on Wikipedia

Since 2007, the English Wikipedia page of Michiel Huisman has received more than 5,286,196 page views. His biography is available in 28 different languages on Wikipedia making him the 3,718th most popular actor.

Among ACTORS In Netherlands