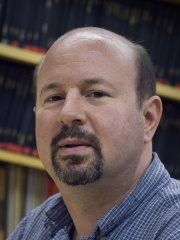 Michael Evan Mann (born 1965) is an American climatologist and geophysicist, currently director of the Earth System Science Center at Pennsylvania State University, who has contributed to the scientific understanding of historic climate change based on the temperature record of the past thousand years. He has pioneered techniques to find patterns in past climate change, and to isolate climate signals from noisy data.As lead author of a paper produced in 1998 with co-authors Raymond S. Bradley and Malcolm K. Hughes, Mann used advanced statistical techniques to find regional variations in a hemispherical climate reconstruction covering the past 600 years. In 1999 the same team used these techniques to produce a reconstruction over the past 1,000 years (MBH99), which was dubbed the "hockey stick graph" because of its shape. Read more on Wikipedia

Since 2007, the English Wikipedia page of Michael E. Mann has received more than 542,631 page views. Her biography is available in 15 different languages on Wikipedia making her the 52nd most popular geologist.

Among GEOLOGISTS In United States