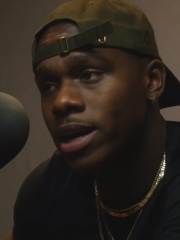 Jonathan Lyndale Kirk (born December 22, 1991), known professionally as DaBaby (formerly known as Baby Jesus), is an American rapper. After releasing several mixtapes between 2014 and 2018, he rose to mainstream prominence in 2019. DaBaby's debut studio album Baby on Baby (2019) peaked at number seven on the Billboard 200, while his second studio album, Kirk (2019), debuted at number one. The former album featured the Billboard Hot 100 top-ten single "Suge", while the latter featured the multi-platinum records "Intro" and "Bop".His third studio album, Blame It on Baby (2020), became his second consecutive number-one album in the US. Read more on Wikipedia

Since 2007, the English Wikipedia page of DaBaby has received more than 8,522,651 page views. His biography is available in 22 different languages on Wikipedia. DaBaby is the 2,857th most popular singer, the 13,665th most popular biography from United States and the 800th most popular American Singer.

Page views of DaBabies by language

Among singers, DaBaby ranks 2,857 out of 3,541. Before him are Mélovin, Kiesza, Miki Fujimoto, Shirley Clamp, Wednesday 13, and Ágústa Eva Erlendsdóttir. After him are Vasil Garvanliev, Imri Ziv, Sasha Song, Shayne Ward, Russian Red, and Slavko Kalezić.