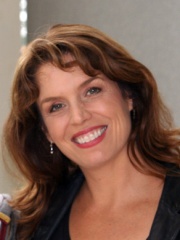 Megan Gallagher (born February 6, 1960) is an American theater and television actress. Having studied at the Juilliard School under the supervision of John Houseman, Gallagher began her career on stage, and has appeared in several Broadway theatre productions, winning a Theatre World Award for her role in A Few Good Men. From there, Gallagher moved to Los Angeles to pursue acting in film and television; after making a screen debut in George Washington, she graduated to recurring roles in Hill Street Blues and China Beach, and starring roles in The Slap Maxwell Story, The Larry Sanders Show and Millennium. Read more on Wikipedia