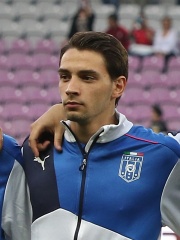 Mattia De Sciglio (Italian: [matˈtiːa de ʃˈʃiʎʎo]; born 20 October 1992) is an Italian professional footballer who plays as a full-back for French club Lyon, on loan from Serie A club Juventus, and the Italy national team. He made his professional debut for Milan in 2011, after several seasons in the club's youth system, and subsequently became a regular in the line-up, being able to play as either right or left back, winning two Supercoppa Italiana titles. He joined Juventus in 2017, winning a domestic double in his first season with the club, followed by two more consecutive Serie A titles and a Supercoppa Italiana. Read more on Wikipedia