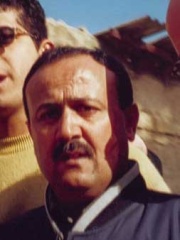 Marwan Hasib Ibrahim Barghouti (also transliterated al-Barghuthi; Arabic: مروان حسيب ابراهيم البرغوثي‎; born 6 June 1959) is a Palestinian political figure convicted and imprisoned for murder by an Israeli court. He is regarded as a leader of the First and Second Intifadas. Barghouti at one time supported the peace process, but later became disillusioned, and after 2000 went on to become a leader of the Second Intifada from the West Bank. Read more on Wikipedia

Since 2007, the English Wikipedia page of Marwan Barghouti has received more than 219,537 page views. His biography is available in 23 different languages on Wikipedia making him the 11,361st most popular politician.