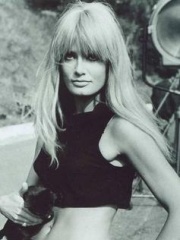 Marisa Mell (born Marlies Theres Moitzi; 24 February 1939 – 16 May 1992) was an Austrian actress. Typecast as a femme fatale in European arthouse and genre films, she is best regarded for her performances as Eva Kant in Mario Bava's critically re-assessed Danger: Diabolik (1968), and the dual role of Susan Dumurrier/Monica Weston in Lucio Fulci's giallo One on Top of the Other (1969). After garnering popularity by appearing in such films as Venusberg (1963), French Dressing (1964), Masquerade (1965), Casanova 70 (1965) and Secret Agent Super Dragon (1966), Mell's attempt to launch a Broadway and Hollywood career ended with the failure of her debut musical Mata Hari. Read more on Wikipedia

Since 2007, the English Wikipedia page of Marisa Mell has received more than 232,335 page views. Her biography is available in 16 different languages on Wikipedia making her the 1,476th most popular actor.