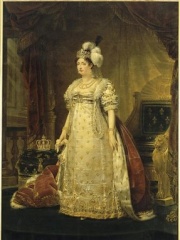 Marie-Thérèse Charlotte of France (19 December 1778 – 19 October 1851), Madame Royale, was the eldest child of Louis XVI and Marie Antoinette, and the only one to reach adulthood (her siblings all dying before the age of 11). She was married to Louis Antoine, Duke of Angoulême, who was the eldest son of the future Charles X, her father's younger brother; thus the bride and groom were also first cousins. After her marriage, she was known as the Duchess of Angoulême. Read more on Wikipedia

Marie Thérèse of France was the youngest daughter of Louis XVI and Marie Antoinette. She was born in 1778 and died in 1851. She was sent to Austria at the age of eight to be raised by her aunt, Empress Maria Theresa. She married her cousin, Emperor Francis II, and became empress of Austria.

Page views of Marie Thérèse of Frances by language

Among noblemen, Marie Thérèse of France ranks 49 out of 843. Before her are Alexei Nikolaevich, Tsarevich of Russia, Louis Antoine, Duke of Angoulême, Elizabeth Charlotte, Madame Palatine, Şehzade Mehmed, Herodias, and Philippe II, Duke of Orléans. After her are Raynald of Châtillon, Henrietta of England, Robert Guiscard, Charles, Count of Valois, Edward the Black Prince, and Sigurd Snake-in-the-Eye.