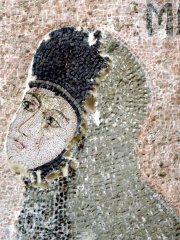 Maria Palaiologina (Greek: Μαρία Παλαιολογίνα) was the daughter of the Byzantine Emperor Michael VIII Palaiologos (ruled 1258-1282) who became the wife of the Mongol ruler Abaqa Khan, and an influential Christian leader among the Mongols. After Abaqa's death she became the leader of a Monastery in Constantinople which was popularly named after her as Saint Mary of the Mongols. Read more on Wikipedia

Among politicians, Maria Palaiologina ranks 7,014 out of 15,710. Before her are Galla Gaulo, Gero, Paul H. O'Neill, Huzziya I, Mohammed Badie, and Suleiman II. After her are Alexandros Mavrokordatos, Infanta Eulalia of Spain, Prince Roman Petrovich of Russia, Pierre-Jules Hetzel, Alexander of Tralles, and Dayan Khan.

Among people born in 1300, Maria Palaiologina ranks 26. Before her are Baibars II, Talabuga, Khutughtu Khan Kusala, Paolo Veneziano, George I of Bulgaria, and Charles I, Lord of Monaco. After her are Sati Beg, Kaykaus II, Philotheus I of Constantinople, Andrea Contarini, Thomas Bérard, and George II of Bulgaria. Among people deceased in 1300, Maria Palaiologina ranks 9. Before her are Guido Cavalcanti, Baiju, Petrus Peregrinus de Maricourt, Trần Hưng Đạo, Robert de Boron, and Liang Kai. After her are Chaka of Bulgaria, Anonymus, Mitso Asen of Bulgaria, Kilij Arslan III, Jacob van Maerlant, and Roy Mata.