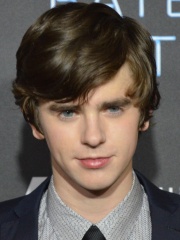 Alfred Thomas Highmore (born 14 February 1992) is an English actor. He made his debut in the comedy film Women Talking Dirty (1999). He is known for his starring roles in the films Finding Neverland (2004), Charlie and the Chocolate Factory (2005), August Rush (2007), and The Spiderwick Chronicles (2008). Read more on Wikipedia

Since 2007, the English Wikipedia page of Freddie Highmore has received more than 11,812,448 page views. His biography is available in 39 different languages on Wikipedia making him the 2,533rd most popular actor.

Among actors, Freddie Highmore ranks 2,500 out of 8,832. Before him are Tom Hollander, Derek de Lint, Will Patton, Jean Hagen, Francesca Annis, and Jesse Eisenberg. After him are Tom Baker, Goran Višnjić, Tarık Akan, Olivier Martinez, Elizabeth Mitchell, and Rex Linn.