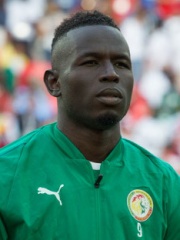 Mame Biram Diouf (IPA: [mam biram dʒuf]; born 16 December 1987) is a Senegalese professional footballer who plays as a striker for Turkish Süper Lig club Hatayspor.Diouf started his career at Diaraf before moving to Molde in 2007. In his first season with them he won the Norwegian First Division, and gained promotion to the Norwegian top division. His performances and goalscoring attracted interest from a number of big clubs, and he eventually moved to Manchester United in 2009, remaining on loan at Molde until January 2010. Read more on Wikipedia

Since 2007, the English Wikipedia page of Mame Biram Diouf has received more than 685,766 page views. His biography is available in 37 different languages on Wikipedia making him the 5,921st most popular soccer player.