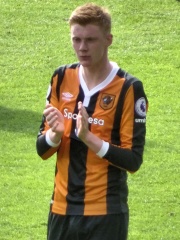 Samuel Raymond Clucas (born 25 September 1990) is an English professional footballer who plays as a midfielder for EFL Championship club Stoke City. Clucas started his career as a youth player for Leicester City where he spent six years, before being released. He studied at Lincoln College and had a spell at Nettleham towards the end of the 2008–09 season, before joining his hometown club Lincoln City where he stayed until being released in the summer of 2010. Read more on Wikipedia

Since 2007, the English Wikipedia page of Sam Clucas has received more than 561,645 page views. His biography is available in 15 different languages on Wikipedia. Sam Clucas is the 16,791st most popular soccer player, the 6,890th most popular biography from United Kingdom and the 1,146th most popular British Soccer Player.