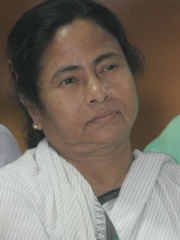 Mamata Banerjee (Bengali: Bengali pronunciation: [mɔmota bɔndoˈpaddʱˈae̯] (listen) (Mamata Bandyopadhyaya) born 5 January 1955) is an Indian politician who is serving as the 8th and current Chief Minister of West Bengal since 2011, the first woman to hold the office. She founded the All India Trinamool Congress (AITC or TMC) party in 1998 after separating from the Indian National Congress, and became its first chairperson. She is often referred to as Didi (meaning elder sister in Bengali)Banerjee previously served twice as Minister of Railways, the first woman to do so. Read more on Wikipedia

The Indian Express
‘Enjoy TrinAmul’: Mamata Banerjee gets an utterly butterly wish as she wins West Bengal elections
Featuring Mamata Banerjee in her signature white cotton saree, donning a face mask -- waving at the cameras, the dairy brand also featured Amul Girl as a photojournalist on the stage in the topical.
Trends Desk
The Indian Express
Mamata Banerjee: Violence taking place in those areas where BJP won
Chief Minister Mamata Banerjee said that when these incidents of violence happened, the law and order was under the Election Commission.
PTI
The Indian Express
Mamata Banerjee swearing-in ceremony LIVE updates: TMC leader reaches Raj Bhavan
The ceremony comes amid mounting pressure on the TMC government over the post-poll violence that claimed at least 14 lives in two days.
Express Web Desk
The Times of India
No place for violence in democracy, Mamata Banerjee should control it: Congress
"The post-poll violence that has been unleashed by the TMC on the Congress workers is unacceptable. Even women and children are not spared. I'm sure the people of West Bengal did not vote for this lawlessness," Prasad said on Twitter.
PTI