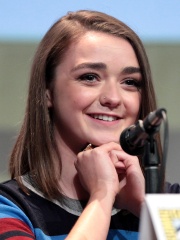 Margaret Constance "Maisie" Williams (born 15 April 1997) is an English actress. In 2011, she debuted in a professional acting role at age fourteen, starring as Arya Stark, a main-cast role in the HBO medieval fantasy epic drama series Game of Thrones (2011–2019), a portrayal that quickly brought the acting newcomer global attention. Williams received critical praise and accolades for her work on the show, including two nominations for the Primetime Emmy Award for Outstanding Supporting Actress in a Drama Series. Read more on Wikipedia

Since 2007, the English Wikipedia page of Maisie Williams has received more than 16,548,352 page views. Her biography is available in 47 different languages on Wikipedia making her the 3,398th most popular actor.