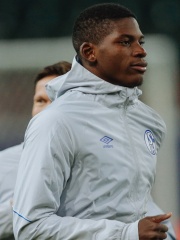 Breel Donald Embolo (born 14 February 1997) is a Swiss-Cameroonian professional footballer who plays as a forward for Ligue 1 club Monaco and the Switzerland national team. Embolo moved with his family to France before finally settling in Switzerland. After working his way through their junior teams, Embolo made his professional debut for Basel in March 2014, and won the Swiss Super League in all three of his first seasons before moving to Schalke 04 for an initial €20 million. Read more on Wikipedia

Among soccer players, Breel Embolo ranks 4,981 out of 16,880. Before him are Zetti, Shay Given, Miguel Tendillo, Francesc Arnau, Abdou Diallo, and Fábio Simplício. After him are Roman Kosecki, Haim Revivo, Pedro León, José Luis Sierra, William Carvalho, and Zé Maria.