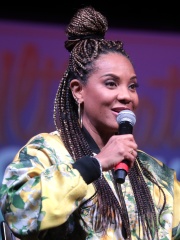 Lana Michele Moorer (born October 11, 1970), better known by her stage name MC Lyte, is a Grammy–nominated American rapper, DJ, actress and entrepreneur. Considered one of the pioneers of female rap, Lyte first gained fame in the late 1980s, becoming the first solo female rapper to release a full album with 1988's critically acclaimed Lyte as a Rock. She released a total of eight solo studio albums (2015's Legend being her latest) and an EP with Almost September.With songs like "Cha Cha Cha", "Paper Thin", "10% Dis", "Ruffneck" (with which she also got the first gold certification by a female solo rap artist) and "Poor Georgie", she has influenced the work of later female rap figures such as Lil' Kim, Da Brat, Missy Elliott, Lauryn Hill and Eve, among others. She has also collaborated with many mainstream artists including Sinéad O'Connor, Janet Jackson, Brandy, Xscape, P. Read more on Wikipedia

Since 2007, the English Wikipedia page of MC Lyte has received more than 1,209,068 page views. Her biography is available in 15 different languages on Wikipedia. MC Lyte is the 3,220th most popular singer, the 14,618th most popular biography from United States and the 883rd most popular American Singer.

Among singers, MC Lyte ranks 3,220 out of 3,541. Before her are Sandro Nicolas, Dean, Daniel O'Donnell, Vanessa Amorosi, Ilinca Băcilă, and Debrah Scarlett. After her are Vrčak, Gor Sujyan, Petra Frey, Kehlani, Sara Evans, and Yui Yatyer.