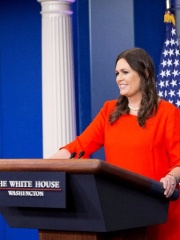 Sarah Elizabeth Sanders (née Huckabee; born August 13, 1982) is an American campaign manager and political adviser who served as White House Press Secretary under President Donald Trump from 2017 to 2019. She previously served as White House Deputy Press Secretary to her predecessor, Sean Spicer, in 2017. Sanders is the third woman to fill the position.A staunch defender of President Trump, as press secretary, she frequently spread misinformation to defend the administration. Read more on Wikipedia

Since 2007, the English Wikipedia page of Sarah Sanders has received more than 1,816,529 page views. Her biography is available in 22 different languages on Wikipedia making her the 14,137th most popular politician.