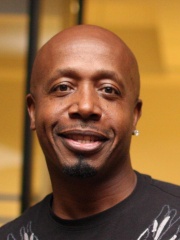 Stanley Kirk Burrell (born March 30, 1962), known professionally as MC Hammer (or simply Hammer), is an American rapper, dancer, record producer and entrepreneur who had his greatest commercial success and popularity from the late 1980s until the early 1990s. Remembered for his rapid rise to fame, Hammer is known for songs (such as "U Can't Touch This" and "2 Legit 2 Quit"), flashy dance movements, choreography and eponymous Hammer pants.A multi-award winner, MC Hammer is considered a "forefather/pioneer" and innovator of pop-rap (incorporating elements of freestyle music) and is the first hip hop artist to achieve diamond status for an album. BET ranked Hammer as the No. Read more on Wikipedia