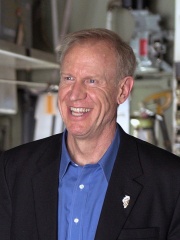 Bruce Vincent Rauner (; born February 18, 1956) is an American businessman, philanthropist, and politician who served as the 42nd governor of Illinois from 2015 to 2019. Prior to his election, he was the chairman of R8 Capital Partners and chairman of the private equity firm GTCR, based in Chicago. The Republican nominee in the 2014 Illinois gubernatorial election, he narrowly defeated Democratic incumbent Pat Quinn by 50.3% to 46.4%. In 2018, after narrowly surviving a challenge in the Republican primary from State Representative Jeanne Ives, Rauner lost the general election to Democratic challenger J. B. Read more on Wikipedia

Among politicians, Bruce Rauner ranks 11,245 out of 15,710. Before him are Hiempsal I, Áedán mac Gabráin, Piotr Jaroszewicz, Bernard Cazeneuve, Per Borten, and Robert Menzies. After him are Jacob Hübner, Nikola Kljusev, Khin Nyunt, Stasanor, Louis Buffet, and Tommaso Tittoni.