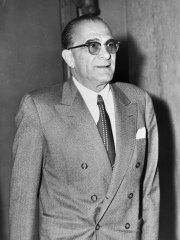 Vito Genovese (Italian: [ˈviːto dʒenoˈveːse, -eːze]; November 21, 1897 – February 14, 1969) was an Italian-born mobster who mainly operated in the United States. Genovese rose to power during Prohibition as an enforcer in the American Mafia. A long-time associate and childhood friend of Lucky Luciano, Genovese took part in the Castellammarese War and helped shape the rise of the Mafia and organized crime in the United States. Read more on Wikipedia

Since 2007, the English Wikipedia page of Vito Genovese has received more than 1,939,856 page views. His biography is available in 15 different languages on Wikipedia making him the 23rd most popular mafioso.