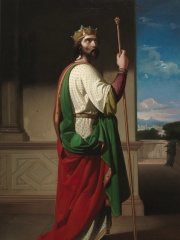 Liuva I (died 570 571-572 or 573) was a Visigothic King of Hispania and Septimania. He was made king at Narbonne following the death of Athanagild in 567. Roger Collins notes this was the first time a Visigothic king is mentioned in the north-eastern region of the realm since 531, when Amalaric was murdered. Read more on Wikipedia

Since 2007, the English Wikipedia page of Liuva I has received more than 20,484 page views. His biography is available in 23 different languages on Wikipedia making him the 5,205th most popular politician.

Page views of Liuva IS by language

Among politicians, Liuva I ranks 5,172 out of 14,801. Before him are Ranjit Singh, Jaunutis, Prince Ferdinand of Saxe-Coburg and Gotha, Emperor Junna, Hamani Diori, and Baruch ben Neriah. After him are Charlotte Amalie of Hesse-Kassel, Fatmir Sejdiu, William II, Duke of Bavaria, Ermesinde of Carcassonne, Amadou Toumani Touré, and Nicolas Catinat.

Among people born in 550, Liuva I ranks 7. Before him are Pope Boniface IV, Teia, Halimah bint Abi Dhuayb, Saint Gall, Anastasius of Persia, and Abdullah ibn Salam. After him are John the Merciful, Garibald I of Bavaria, Cleph, Arioald, Menander Protector, and Shibi Khan. Among people deceased in 573, Liuva I ranks 1.