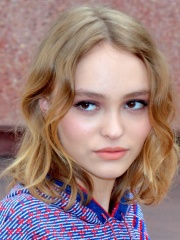 Lily-Rose Melody Depp (born 27 May 1999) is a French-American actress and model. The daughter of actor Johnny Depp and singer Vanessa Paradis, Depp began her acting career with a small role in Tusk (2014), and went on to star in the period drama The Dancer (2016), in which she played Isadora Duncan, Planetarium (2016), and The King (2019). Depp has been nominated for César Awards for Most Promising Actress for her performances in The Dancer and A Faithful Man (2018). Read more on Wikipedia

BuzzFeed News
Johnny Depp Fans Are Bombarding His Daughter Lily-Rose Depp With Abusive Messages On Instagram For Not Publicly Supporting Him During The Amber Heard Trial
This is not the first time that Johnny’s supporters have been called out for problematic behavior online.View Entire Post ›
Stephanie Soteriou