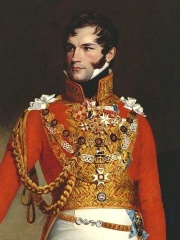 Leopold I of Belgium

Leopold I (French: Léopold; 16 December 1790 – 10 December 1865) was the first king of the Belgians, reigning from July 1831 until his death. The youngest son of Duke Francis of Saxe-Coburg-Saalfeld, Leopold took a commission in the Imperial Russian Army and fought against Napoleon after French troops overran Saxe-Coburg during the Napoleonic Wars. After Napoleon's defeat, Leopold moved to the United Kingdom where he married Princess Charlotte of Wales, who was second in line to the British throne and the only legitimate child of the Prince Regent (the future King George IV). Read more on Wikipedia

Page views of Leopold I of Belgiums by language

Among politicians, Leopold I of Belgium ranks 398 out of 15,710. Before him are Tiberius Gracchus, Woodrow Wilson, Richard II of England, Toyotomi Hideyoshi, Theodoric the Great, and Galerius. After him are Miklós Horthy, Orhan, William III of England, Radovan Karadžić, Moctezuma II, and Mithridates VI of Pontus.