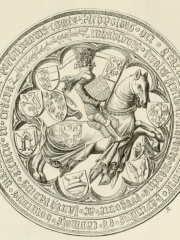 Leopold IV of Austria (1371 – June 3, 1411), Duke of Further Austria, was an Austrian Habsburg Duke of the Leopoldinian Line, known as "the Fat".He was the second son of Leopold III. His eldest brother Duke William of Inner Austria took him as his effective co-ruler, putting him in particular charge of Further Austria, which also meant ancestral Habsburg lands in Swiss Aargau etc. Read more on Wikipedia

Page views of Leopold IV, Duke of Austrias by language

Among noblemen, Leopold IV, Duke of Austria ranks 298 out of 843. Before him are Maximilian, Duke of Hohenberg, Prince Michael of Kent, Gioffre Borgia, Grand Duchess Kira Kirillovna of Russia, Philibert I, Duke of Savoy, and Duke Maximilian Emanuel in Bavaria. After him are William Adelin, Margaret, Maid of Norway, Fulk III, Count of Anjou, Albrecht, Duke of Bavaria, Duchess Maria Dorothea of Württemberg, and Amadeus V, Count of Savoy.