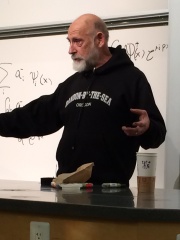 Leonard Susskind (; born June 16, 1940) is an American physicist, who is a professor of theoretical physics at Stanford University, and founding director of the Stanford Institute for Theoretical Physics. His research interests include string theory, quantum field theory, quantum statistical mechanics and quantum cosmology. He is a member of the US National Academy of Sciences, and the American Academy of Arts and Sciences, an associate member of the faculty of Canada's Perimeter Institute for Theoretical Physics, and a distinguished professor of the Korea Institute for Advanced Study.Susskind is widely regarded as one of the fathers of string theory. He was the first to give a precise string-theoretic interpretation of the holographic principle in 1995 and the first to introduce the idea of the string theory landscape in 2003.Susskind was awarded the 1998 J. J. Read more on Wikipedia