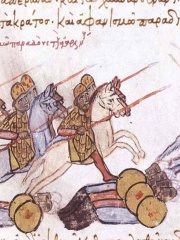 Leo Phokas or Phocas (Greek: Λέων Φωκᾶς, c. 915–920 – after 971) was a prominent Byzantine general who scored a number of successes in the eastern frontier in the mid-10th century alongside his older brother, the Emperor Nikephoros II Phokas. He served as chief minister during his brother's reign, but was dismissed and imprisoned by his successor, John Tzimiskes. Read more on Wikipedia

Page views of Leo Phokas the Youngers by language

Among people born in 915, Leo Phokas the Younger ranks 5. Before him are Al-Hakam II, Boleslaus I, Duke of Bohemia, Al-Mutanabbi, and Conrad I, Duke of Swabia.