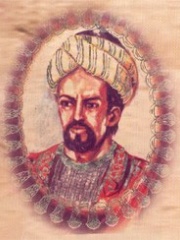 Abū al-Ṭayyib Aḥmad ibn al-Ḥusayn al-Mutanabbī al-Kindī (Arabic: أبو الطيب أحمد بن الحسين المتنبّي الكندي; c. 915 – 23 September 965 AD) from Kufa, Abbasid Caliphate, was a famous Abbasid-era Arab poet at the court of the Hamdanid emir Sayf al-Dawla in Aleppo, and for whom he composed 300 folios of poetry. His poetic style earned him great popularity in his time and many of his poems are not only still widely read in today's Arab world but are considered to be proverbial. He started writing poetry when he was nine years old. Read more on Wikipedia

Al-Mutanabbi is most famous for his poetry. He is considered one of the best poets in the Arab world.

Page views of Al-Mutanabbis by language

Among writers, Al-Mutanabbi ranks 1,042 out of 5,755. Before him are Jerome K. Jerome, Marcus Minucius Felix, John Malalas, Will Durant, Corinna, and Robert Merle. After him are Bulat Okudzhava, Sonia Rykiel, Ellen Key, Bharata Muni, Khachatur Abovian, and Robert de Montesquiou.

Among people born in 915, Al-Mutanabbi ranks 3. Before him are Al-Hakam II and Boleslaus I, Duke of Bohemia. After him are Burchard III, Duke of Swabia, Conrad I, Duke of Swabia, and Leo Phokas the Younger. Among people deceased in 965, Al-Mutanabbi ranks 3. Before him are Pope Benedict V and Pope Leo VIII. After him are Bruno the Great, Hedwig of Saxony, Arnulf I, Count of Flanders, Gero, Ibn Hibban, Otto, Duke of Burgundy, and Joseph Bringas.

Among WRITERS In Iraq