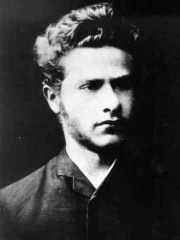 Leon "Leo" Jogiches (Russian: Лев "Лео" Йогихес; 17 July 1867 – 10 March 1919), also commonly known by the party name Jan Tyszka, was a Polish Marxist revolutionary and politician, active in Poland, Lithuania and Germany. Jogiches was a founder of the political party known as The Social Democracy of the Kingdom of Poland (main forerunner of the Communist Party of Poland) in 1893 and a key figure in the underground Spartacus League in Germany, the predecessor of the Communist Party of Germany, during the years of World War I. For many years the personal companion and a close political ally of internationally famous revolutionary Rosa Luxemburg, Jogiches was assassinated in Berlin by right-wing paramilitary forces in March 1919 while investigating Luxemburg's murder some weeks before. Read more on Wikipedia

Among politicians, Leo Jogiches ranks 4,308 out of 15,710. Before him are Ivan Serov, Baruch ben Neriah, Adel Shah, Haakon II of Norway, Prince Ernest Augustus of Hanover, and Vicente Guerrero. After him are William X, Duke of Aquitaine, Princess Maria Antonia of Naples and Sicily, Pál Teleki, Salva Kiir Mayardit, Phraortes, and Abbas Mirza.