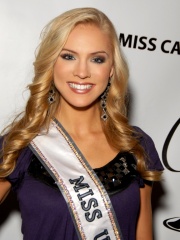 Kristen Jeannine Dalton-Wolfe (born December 13, 1986) is an American actress, model and beauty pageant titleholder who won Miss USA 2009 and represented the United States at Miss Universe 2009 pageant where she placing in the Top 10. Read more on Wikipedia

Since 2007, the English Wikipedia page of Kristen Dalton has received more than 5,956 page views. Her biography is available in 15 different languages on Wikipedia making her the 136th most popular celebrity.

Among celebrities, Kristen Dalton ranks 146 out of 140. Before her are Agbani Darego, Alexandria Mills, Demi-Leigh Nel-Peters, Manushi Chhillar, Rachel Smith, and Joe the Plumber. After her are Annelies Törös, Alice Sabatini, Nina Davuluri, and Poonam Pandey.