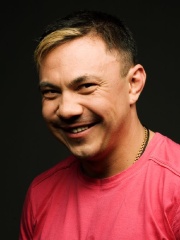 Konstantin Borisovich "Kostya" Tszyu (; Russian: Константин Борисович «Костя» Цзю, IPA: [kənstɐnʲˈtʲin bɐˈrisəvʲɪtɕ ˈkosʲtʲə ˈdzːʲu]; born 19 September 1969) is a Russian Australian former professional boxer who competed from 1992 to 2005. He held multiple light-welterweight world championships, including the undisputed and lineal titles between 2001 and 2005. Tszyu was an exceptional all-around boxer-puncher who relied heavily on accuracy, timing, and carried formidable punching power; he is often regarded as one of the hardest-punching light-welterweights in the division's history.As an amateur, Tszyu represented the Soviet Union, winning a bronze medal in the lightweight division at the 1989 World Championships, and gold in the light-welterweight division at the 1991 World Championships. Read more on Wikipedia

Among BOXERS In Russia