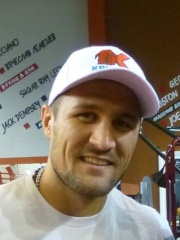 Sergey Alexandrovich Kovalev (Russian: Сергей Александрович Ковалёв (Ko-va-LYOV); born 2 April 1983) is a Russian professional boxer. He has held multiple light-heavyweight world championships, including the WBA (Undisputed) and IBF titles from 2014 to 2016, and the WBO title three times between 2013 and 2019. Nicknamed the "Krusher", Kovalev is particularly known for his exceptional punching power, although he describes himself as "just a regular boxer".In November 2019, Kovalev was ranked as the world's second-best light-heavyweight by The Ring magazine, third by BoxRec, and fourth by the Transnational Boxing Rankings Board. Read more on Wikipedia

Among BOXERS In Russia