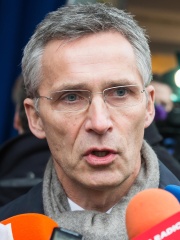 Jens Stoltenberg (born 16 March 1959) is a Norwegian politician who has served as the 13th secretary general of NATO since 2014. A member of the Labour Party, he previously served as the prime minister of Norway from 2000 to 2001 and again from 2005 until 2013. In 2011, Stoltenberg received the United Nations Foundation's Champion of Global Change Award, chosen for his extraordinary effort toward meeting the Millennium Development Goals and bringing fresh ideas to global problems. Read more on Wikipedia

Jens Stoltenberg is most famous for being the Prime Minister of Norway from 2005 to 2013 and the Secretary General of NATO from 2014 to present.

Among politicians, Jens Stoltenberg ranks 1,898 out of 15,710. Before him are Al-Hajjaj ibn Yusuf, Muwatalli II, Kilij Arslan I, Di Renjie, Jang Song-thaek, and Gwanggaeto the Great. After him are Diaochan, Ferdinand III, Grand Duke of Tuscany, Al-Mutawakkil, William Ewart Gladstone, Biljana Plavšić, and Songtsen Gampo.