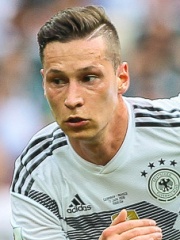 Julian Draxler (German pronunciation: [ˈjuːli̯aːn ˈdʁakslɐ]; born 20 September 1993) is a German professional footballer who plays as an attacking midfielder for Ligue 1 club Paris Saint-Germain and the Germany national team. He is known for his ability to use both feet, his speed, and the power of his shot.Draxler made his Bundesliga debut for Schalke 04 aged 17 in January 2011, and in May of that year scored the first goal as the side won the DFB-Pokal Final. In total, he played 171 competitive matches for Schalke, scoring 30 goals, before transferring to VfL Wolfsburg in 2015. Read more on Wikipedia