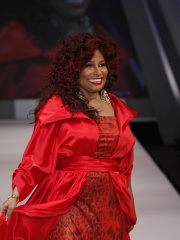 Yvette Marie Stevens (born March 23, 1953), better known by her stage name Chaka Khan, is an American singer and songwriter. Her career has spanned nearly five decades, beginning in the 1970s as the lead vocalist of the funk band Rufus. Khan received public attention for her vocals and image. Read more on Wikipedia

Since 2007, the English Wikipedia page of Chaka Khan has received more than 4,229,471 page views. Her biography is available in 39 different languages on Wikipedia making her the 909th most popular musician.