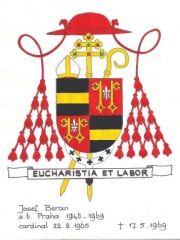 Josef Beran (29 December 1888 – 17 May 1969) was a Czech Roman Catholic prelate who served as the Archbishop of Prague from 1946 until his death and was elevated into the cardinalate in 1965.Adam Beran was imprisoned in the Dachau concentration camp during World War II after the Nazis had targeted him for "subversive and dangerous" behavior where he almost died in 1943 due to disease. He was freed in 1945 upon Allied liberation and Pope Pius XII nominated him to head the Prague archdiocese. But the introduction of the communist regime saw him imprisoned and placed under house arrest. Read more on Wikipedia

Among religious figures, Josef Beran ranks 1,727 out of 2,238. Before him are Marie-Alphonsine Danil Ghattas, Constantine, Squanto, Maurizio Malvestiti, Adrianus Johannes Simonis, and Alfred Delp. After him are Stephen of Perm, Patriarch Job of Moscow, Marie-Joseph Lagrange, Federico Lombardi, Anders Arborelius, and Johann Theodor of Bavaria.

Among RELIGIOUS FIGURES In Czechia