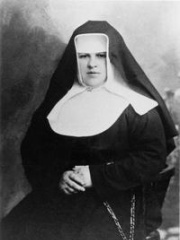 Maria Restituta Kafka (1 May 1894 – 30 March 1943) was an Austrian nurse of Czech descent and religious sister of the Franciscan Sisters of Christian Charity (Sorores Franciscanae a Caritate Christiana). Read more on Wikipedia

Since 2007, the English Wikipedia page of Maria Restituta Kafka has received more than 20,445 page views. Her biography is available in 17 different languages on Wikipedia making her the 1,366th most popular religious figure.

Among religious figures, Maria Restituta Kafka ranks 1,360 out of 2,001. Before her are Melchior Hoffman, Dagobert of Pisa, Ignatius Kung Pin-Mei, Richard Williamson, Severus of Antioch, and Vigilius of Trent. After her are Jacques Hamel, Virgilio Noè, Maxim of Bulgaria, Carlo Caffarra, Michel Sabbah, and Hilarion of Kiev.