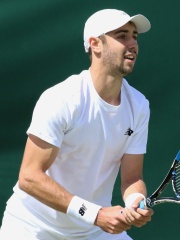 Jordan Thompson (born 20 April 1994) is an Australian professional tennis player, reaching a career-high ranking of world number 43 on 15 July 2019. He made his Grand Slam debut at the 2014 Australian Open after winning the Australian Open wild card play off on 15 December 2013. Read more on Wikipedia

Since 2007, the English Wikipedia page of Jordan Thompson has received more than 17,206 page views. Her biography is available in 15 different languages on Wikipedia making her the 941st most popular tennis player.