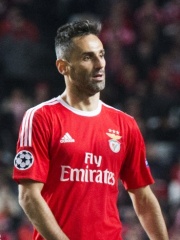 Jonas Gonçalves Oliveira (born 1 April 1984), known as Jonas (Brazilian Portuguese: [ˈʒõːnas]), is a Brazilian former professional footballer who played as a striker. A Brazilian international on twelve occasions, he could also play as an attacking midfielder. Jonas started his career in Brazil with Guarani, later joining Santos, Grêmio (Bola de Prata in 2010) and Portuguesa before moving to Spanish side Valencia in 2011. Read more on Wikipedia

Since 2007, the English Wikipedia page of Jonas Gonçalves Oliveira has received more than 870,372 page views. His biography is available in 32 different languages on Wikipedia making him the 2,566th most popular soccer player.