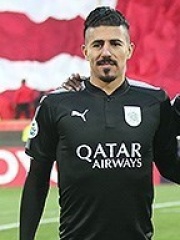 Baghdad Bounedjah (Arabic: بغداد بونجاح, born 24 November 1991) is an Algerian professional footballer who plays as a striker for Qatar Stars League club Al Sadd and the Algeria national team. Throughout his club career, Bounedjah has played for Algerian sides RCG Oran and USM El Harrach, and Tunisian side Étoile du Sahel, before joining Qatari club Al Sadd in 2015. In the 2018–19 Qatar Stars League season, he scored a league record of 39 goals in one season, and was the world's leading goalscorer during the 2018 calendar year with 58 goals overall.At international level, Bounedjah made his senior debut for Algeria in 2014 and has represented his nation at the 2016 Summer Olympics, and two editions of the Africa Cup of Nations. Read more on Wikipedia

Among SOCCER PLAYERS In Algeria