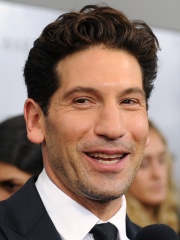 Jonathan Edward Bernthal (; born September 20, 1976) is an American actor. He is best known for his portrayal of Shane Walsh on the AMC horror series The Walking Dead (2010–2012; 2018) and Frank Castle / The Punisher on the Netflix action series Daredevil (2015–2018) and The Punisher (2017–2019) and as Sgt Manuel Rodriguez in the miniseries The Pacific (2010). He began his career in theater before guest starring on various television shows. Read more on Wikipedia

Since 2007, the English Wikipedia page of Jon Bernthal has received more than 10,092,737 page views. His biography is available in 40 different languages on Wikipedia making him the 1,770th most popular actor.